It is believed that over three million people were affected by the January 2010 earthquake in Haiti, leaving thousands of Haitian people without homes, many of them women who are single parents and heads of households. Kay Pou Fanm Ayisyen is a project of Haitian Connection, a Haitian NGO, in partnership with women’s groups in Jeremie. The Jeremie area had to accommodate 80,000 earthquake refugees, many of them women and children. Studies have shown that women, who own their own homes in Haiti are more able to maintain their own small businesses, and feed, clothe and educate their children.

As of December 31, 2012 34 houses have been built. These new homes provide shelter and stability for 34 families in the Lartiboliere and Deschamps communities right outside the town of Jeremie. Donations have exceeded our expectations, and we are planning to built at least 5 new houses in the first part of 2013. Here are some of the families: 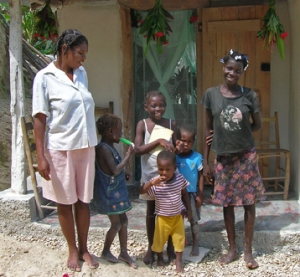 Micheline Deralen is a 37 year old woman with eight children. The oldest is 22 years old and the youngest is 4 years old. Her own mother died when she was very young and she did not go to school herself. She is able to send three of her children to school.

Madame St. Louis is a 33 year old woman with six children – ages 14, 11, 8, 7, 6, and 14 months. She is currently only able to send two of her children to school. She used to live together with her sister in law, but her sister’s husband wanted to abuse her so she moved out. She is very happy with her new house and the safety and security it provides. 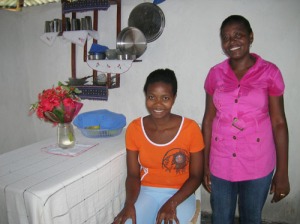 Enid Dorsey is a 25 year old woman. She and her husband and their three children used to live in Port au Prince. When the earthquake struck she and her family were buried under the ruble and stayed there for two days. She and her children were dug out alive but her husband died. She lived in the Nazon neighborhood of Port au Prince. Her arm and her fingers are injured. Her children are 11, 8, and 3 years old. She is sending them to school. She used to live with her parents and 11 other people in a very small house right after the quake. She is thrilled to have a house for herself and her children.

Haitian Connection has worked in partnership with local mothers groups to help identify and support families in need. 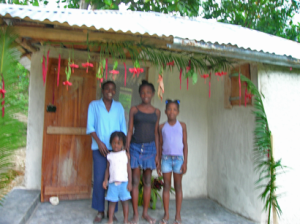 We are delighted to report that the first house and latrine are finished and we are working on seven more. The house is located outside of the town of Jeremie and now belongs to Margarette Saintilus. Margarette is 39 years old, and she has two children: Emanuella who is 14 years old and Stevensia who is 12 years old. Every year in December Margarette would go to Port au Prince where she stayed with her sister. She would buy things to bring back to Jeremie to sell. Margarette was still in Port au Prince when the earthquake happened. Her sister’s house was flattened and her sister and her husband were killed. Margarette was not inside at the time of the quake, and survived. Her sister’s two children Imacula, 4 years old, and Onelson, 5 years old, also survived the earthquake, and are now living with Margarette.

It was the mothers’ group in the small community who chose Margarette as the first recipient of the house. When Margarette received the news, she was elated. She was living in a little hovel, where rain was leaking through the roof. Her father who died left her this rundown little house, so she has the legal title to the land where her new house is being built. The whole community has been helping Margarette with the construction, carrying cement, rocks and wood. In addition about 7 people found paid employment through this construction project.

The first house has been built through contributions from SS. Monica and Luke Church in Gary, Indiana, and from the students and faculty at Catholic Theological Union in Chicago. We have received additional contributions which will allow us to continue to build; our thanks to the Franciscan School of Theology in Berkeley, the Holy Spirit Missionary Sisters, and the Cynthia Gladys Blake Ebanks Foundation. A number of individuals have also contributed, but they wish to remain anonymous.

Trees That Feed Foundation has agreed to provide 3 trees for each house that we have built so far, as well as for the new houses under construction. In addition, Haitian Connection will provide a biosand filter with each house being constructed. It is important that the families have clean drinking water, since cholera has not been eliminated yet.

To all who contributed to this effort a huge Thank You!! You are truly making a difference!

All donations and funds go directly to the building of homes for women in Haiti.

Find out how you can support these projects and get involved.